During thermal evaporation, the wire-shaped coating material is continuously fed onto resistance-heated crucibles. The wire first liquefies and then passes into the gas phase in the form of a vapour cloud. The substrate to be coated is guided over a rotating, cooled roller, which is positioned just above the crucibles. Thus, the coating material evaporates onto the substrate, where it condenses and forms the desired layer.

The wire speed and the temperature of the crucible can be used to set the evaporation rate and, in conjunction with the substrate's web speed, the desired coating thickness.

For cathode sputtering we use magnetron sputtering, which has proven to be the most economical method in practice. In this process, the coating material is used in the form of plates (targets). An electric field is generated between the target and the substrate, whereby the target is set to negative potential.

Within the electric field a plasma is generated consisting of positive argon ions, electrons and neutral particles. Because of its extraordinary properties, plasma is often referred to as the fourth state of matter.

The argon ions are accelerated in the electric field by the negative target.
This leads to impact processes in which the target atoms are removed or atomized (sputtered).

The resulting metal vapor condenses as a thin layer on the passing substrate. The ionization rate and thus the deposition rate are significantly increased by magnets mounted underneath the targets.

Compared to thermal evaporation, cathode sputtering offers advantages in terms of a larger selection of coating materials, better adhesion of the coating material to the substrate and a more uniform layer thickness distribution.

The disadvantage is that due to a much lower deposition rate, slower web speeds are required to achieve the same film thicknesses as thermal evaporation.

In order to achieve optimum adhesion even on low-energy surfaces, ROWO can subject the substrates to plasma modification.

A plasma system upstream of the coating station enables us to clean and activate the substrate surface inline directly before metallization. The low-pressure plasma is generated by a bipolar pulsed glow discharge. By varying the coupled power, the gases used and the web speed, the surface modification for the different substrate materials can be specifically optimized.

Using suitable gas mixtures, functional groups and radicals can be specifically generated on the polymer surface, which significantly improve the surface energy and thus the wetting/adhesion of subsequent metallization, printing or coating. 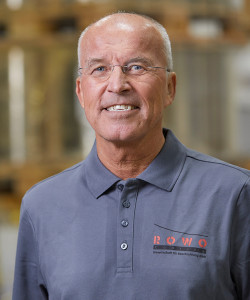